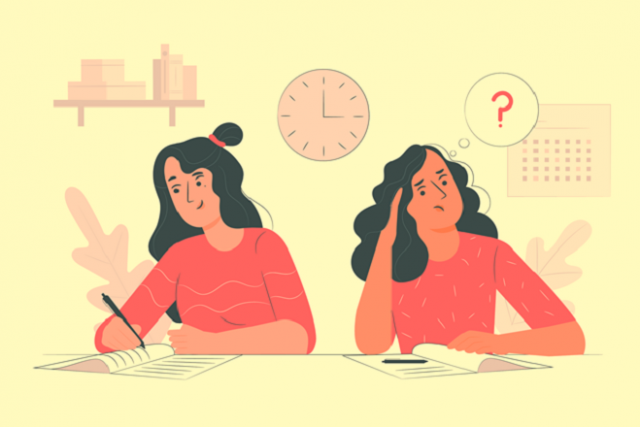 CBSE Exam Preparation Tips for Class 7: The CBSE class 7 syllabus contains topics that are very important in laying the foundation for higher education. The syllabus for class 7 is not that extensive and you can easily cover it by preparing yourself well. Here we have concluded some of the best tips for preparing for the CBSE class 7 exam.

Following these simple tips will not only help you pass your exam, but will also help you achieve your desired grades with flying colors. With dedication, smart work, and hard work, anything is possible and you can achieve whatever you put your mind to. So to start your preparation, you can start with:

Cramming is a habit to avoid. Students often study at the last minute when their exams approach. Cramming is not a good habit and should be avoided. Studying just a day or two before the exam will put additional pressure on you, this is not a beneficial way to learn and this information will not be kept for long. Get into the habit of studying from the beginning of the session. Small study sessions early on will help you avoid studying overpressure before your exam.

You can prepare for your exam by studying at NCERT. NCERT is a CBSE preferred book. You can easily access the class 7 solutions pdf from Vedantu ncert science book for the solutions or answers. You can also check out other class 7 books after completing NCERT. NCERT books contain the right amount of information needed to achieve high scores on your math test. It is based on the CBSE guidelines and also belongs to the accurate and up-to-date CBSE curriculum.

Learning through an electronic medium by watching a documentary or educational video is also known as e-learning. There are several advantages to learning by watching a video. It can help you refresh yourself and bring a change in your daily study pattern. Images also help retain information for a longer period. You can also study a chapter in your book and watch a video of it. For example, if you have completed a particular book topic, for example, “English”, you can also watch videos of the same topic for better learning.

You can take quizzes or games for your syllabus topics. You can find some quizzes in your books or other platforms. You can also try to solve the questions given in your NCERT book and find your solutions in the chapters. Finding the answers on your own will eventually lead to a better understanding of the chapters. Solving puzzles also help students improve their logical reasoning skills and increase their critical thinking.

Practice as much as you can. You can study and read the topics, but they will only be fruitful if you write and practice a lot. Practice is the key to success. You can also study from NCERT or other textbooks. Some of the subjects in class 7 such as math, science, English need a lot of practice and will continue to improve thanks to your dedication to practice or answer their questions.

The most important way to get good grades is to analyze your time, plan your daily routine, and also, do not forget to take breaks, taking breaks between preparation is very important, taking breaks increases post-rest efficiency but the proportion of breaks and preparation. Try to maximize your efficiency and study at least three topics in detail in one day. Take an hour-long rest interval between the three topics or when you need to rest.

Once you have completed your CBSE class 7 syllabus, you should start reviewing your chapters. You can make a different schedule for reviews, you can review from the notes you have made throughout the year. Notes are the best source to review when you have a limited time on your hands. Your notes throughout the year will also be easy to understand for you to review.

8. Question articles and sample papers from the previous year

9. Eat nutritious food and get a good night’s sleep

Eat nutritious food, ensure the physical movements of your body and get enough sleep. Don’t overload yourself while you prepare, you don’t have to study for 24 hours to achieve high grades. Sometimes studying too much and not getting enough rest can also be detrimental. Your lifestyle and sleep cycle directly affect your attention or concentration, so it’s important to take proper care of yourself and sleep.

Achieving high scores on the CBSE class 7 exam is important, but understanding the concepts in depth is much more important because the foundation of higher studies takes place in class 7. When you try to understand the chapters correctly, you will eventually get good grades. on your exam. . The other important factor in getting good grades is maintaining confidence throughout the exam and during practice. A positive attitude can do wonders. It is natural to feel nervous, but if you have prepared well, you will easily get the desired notes. All the best!

Is water billing software helpful to you?